We are going to show You some of the Most Beautiful Old Letterheads and Billheads from Our Collection and a History ( If Possible ) of the Company or Corporation. These 19th and 20th Century Antique Letterheads are Truly an Art Form Created By Early Printing and Engraving Companies.

A Beautiful Old Letterhead from The Werner Company of Akron Ohio. At the age of 16, Paul E. Werner immigrated to America in 1867. He worked as a clerk and bookkeeper at several Akron stores. In 1873, Paul became an editorial writer for the Akron Germania newspaper. It was a popular German-language publication. He enjoyed it so much that he bought the newspaper a year later and became publisher. In the 1870s, Paul founded the Sunday Gazette and the Akron Tribune. He also began a commercial printing enterprize. In 1884, Paul quit the newspaper business and began making high-quality books. He built a printing plant in 1886 and built his sales offices all over the USA. Soon, he would have branches in 20-countries. Among the gold-leafed titles that the Werner Co. published in Akron were Webster's Dictionary, Encyclopaedia Britannica, Encyclopaedia Americana, the Waldorf Cook Book, the White House Cook Book and World's Best Literature. In the 1890s, the factory was producing 10,000 volumes a day. They would fill six train cars. Paul became friends with President William McKinley, Buffalo Bill Cody, French painter James Tissot, German Count Ferdinand Zeppelin and Queen Victoria. At the turn of the 20th century, Paul was hosting lavish gatherings at his Akron mansion. He was a multimillionaire. In 1904 he built Akron's German-American Music Hall. However, in 1908, Paul's fortune came to an end. Britannica filed suit alleging trademark violations. He was sued in all 20-countries where he did business. Paul hired a "dream team" of high profile lawyers and claimed victory in every suit. But the litigation cost him a fortune. In 1910, Paul's business collapsed. He filed bankruptcy and had to sell his 11-building Akron complex. Paul left Akron in 1915 to open a rubber company in Kansas City. But he lost his backing. That company folded in 1925. In 1927, next to broke, Paul returned to Akron and got a hero's welcome. Franklin A. Seiberling held a party for him at Stan Hywet Hall, Frank's Akron estate. Seiberling had bought the old Germania newspaper and gave it back to Paul. Paul Werner died of Bright's disease at the age of 80. Akron's elite packed the funeral. Click Here for More Information about Paul E Werner Printing and Litho Company 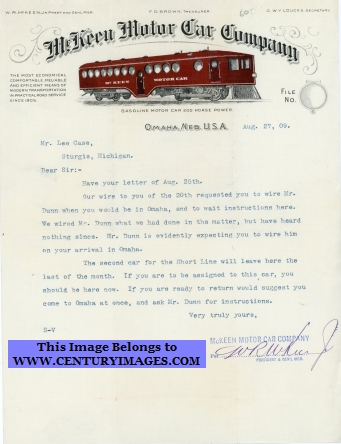 A Vintage Old Letterhead of the McKeen Motor Car Company of Omaha Nebraska The McKeen Motor Car Company of Omaha, Nebraska was a builder of internal combustion-engined railroad motor cars (railcars), constructing 152 between 1905–1917.[1] Founded by William McKeen, the Union Pacific Railroad's Superintendent of Motive Power and Machinery, the company was essentially an offshoot of the Union Pacific and the first cars were constructed by the UP before McKeen leased shop space in the UP's Omaha Shops in Omaha, Nebraska. The UP had asked him to develop a way of running small passenger trains more economically, and McKeen produced a design that was ahead of its time. Unfortunately, internal combustion engine technology was not, and the McKeen cars never found a truly reliable powerplant. The vast majority of the cars produced were for E. H. Harriman's empire of lines (Union Pacific, Southern Pacific and others). Harriman's death in 1909 lost the company its major sponsor and investor, and Harriman's successors were less enthusiastic about the McKeen cars. Many McKeen cars ended up being re-engined with a variety of drive mechanisms — gasoline-mechanical, gasoline-electric, diesel-electric, or even steam power. Most, although not all, McKeen cars had the distinctive "wind-splitter" pointed aerodynamic front end and rounded tail. The porthole windows were also a McKeen trademark, adopted allegedly for strength after the 7th production car. A dropped central door was also present on the majority of the cars. Two lengths, 55 and 70 feet, were offered; either could be fitted out with a large mail and express area ahead of the center doors, a smaller mail/express area, or the car could be all seats for a maximum capacity of 64 or 105 respectively. Click Here for More Information about McKeen Motor Car Company